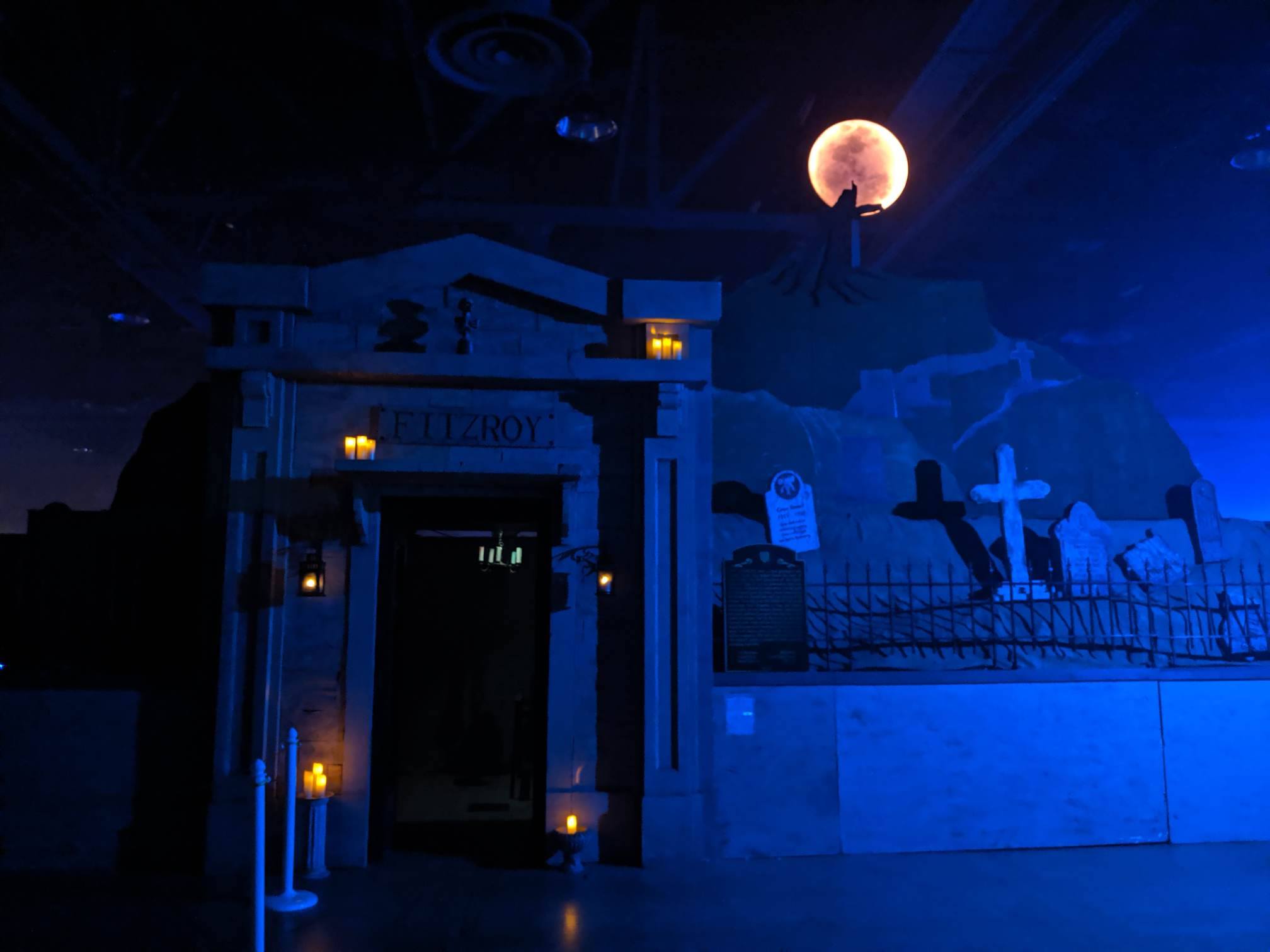 We were invited to help build a haunt for Midsummer Scream 2019.

We were very excited to start the year with this invitation. After our 2016 Hallowe’en season, Rick West invited us to be a part of the Hall of Shadows at Midsummer Scream in 2017. Unfortunately life had other ideas and we had to back out. Our landlord at the time decided not to renew our lease, and we had to very hurriedly find a new home. We had not been prepared to move, and part of this meant selling a 50% of our belongings in order to move quickly. This included almost the entire haunt. It was 15-ish years of building, collecting and saving – gone.  I did my best to keep a stiff upper lip, but I was devistated inside at the time. Haunting has been the only real success I have achieved. Even though it doesn’t make me any money, I belong here. I didn’t think I would ever haunt again, because I couldn’t imagine being able to build the haunt again.

Enter my friend and creative partner, Aaron. We’d been talking about various projects over the couple years we had known eachother. I had saved a small bit of decorations for the front yard and kept putting up a yard display at the new house. And Rick West kept coming to see it. After a couple of years, the sting of losing everything wore off a little and Aaron and I decided to build a new haunt. He’s the core designer, and I had been really excited about sketches he’d done for 2017. When Rick showed up to our yard display in 2018, I said “We’re ready. Is the invitation still good?” and he was like: “Duh!”

So fast forward to January, and Aaron and I started having design meetings. Going over ideas and sketches. We had both just seen Haunting of Hill House which influenced us

greatly. Unfortunately none of our HoHH easter eggs were in the final design but it was still inspiring to us. We knew we wanted it to be a crypt – our story centers around the Fitzroy family and plays out in the cemetery. We eventually settled on a huge crypt facade, built into the side of rolling hills with a tree on top and the haunt being underneath the hills. This was inspired by an original sketch Aaron did in 2017, but we ended up refining it. My inspiration came directly from Highgate Cemetery outside of London. I visited there in 2015 and it was a lightning bolt of inspiration. That’s where the Fitzroy’s story came from.

Anyway, by the end of February we had a plan set out and knew it was a huge project, maybe too big, but we somehow thought it would work. We began trying to recruit volunteers to help us build, and that proved more difficult than I’d expected. For the first 3 months of building Aaron and I were on our own. Then, in February, it started raining. And raining. And raining some more. We were dumbfounded that California, which had been locked in a extreme drought for a decade, had suddenly become a wet state. The drought was over but DAMN. We were trying to build a haunt and were falling further behind by the day!

We decided to start with wall panels. We couldn’t afford full-on wall panels with luan and 1×3’s. Also, I have to watch the weight I lift, so I needed something lighter since I’d be doing a lot of moving panels myself. So we devised a 1×2 furring strip and hardboard panel that was lightweight and less costly. I love these wall panels for the most part. They are not as sturdy as professional flats, but I feel like on a budget they are good enough. Aaron was not so excited about it, but we made it work.

For the first few months, I struggled to get the panels painted. For fire safety they had to be painted on all sides, and some needed a stone finish while others needed a black finish. On top of that there were different sizes and we kept changing the design of the haunt little by little so things got confusing. It took way too long to get the wall panel project done, but it was a lesson learned.

We also started making faux vines early on. We knew we wanted the haunt to be covered in tons of vines so we tried different methods. We tried different kinds of ropes twisted together and dipped in latex paint. We tried twisting plastic bags and dipping it in paint. None of it worked perfectly and it was a pain in the ass to make. On a tip from our friends at Rotten Apple 907 we ended up making most of the vines out of “Foam Backing Rod” and spray paint. The effect was better than previous attempts, and much easier. We never did end up covering the haunt in vines like we wanted because, well… nothing goes as expected.

But that’s part two of the story, coming soon.